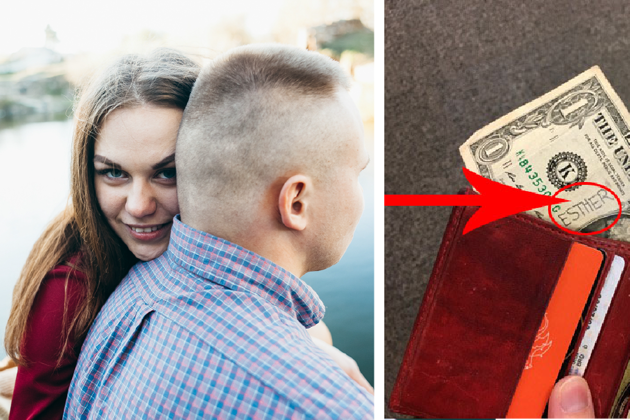 It was lunch time at a Deli in Chicago when a tiny word caught Paul Grachan's eye.

The name was written on a dollar bill he was about to hand the deli clerk, but when he spotted it, he jerked the dollar back and looked at it in wonder.

Esther was the name of a woman he had gone out with about eight times, and at the moment when he saw the dollar bill, he was contemplating asking her to be his girlfriend.

"I thought, oh, that's weird. I'm thinking about asking her to go steady and I get this dollar that says, 'Esther' on it. That's bizarre. So I stuck it in my pocket," Paul said in an interview with This American Life.

Paul decided the peculiar dollar would be a funny gift to give Esther during their date the following Friday (the day he planned on making their relationship official). He bought a floating frame and a piece of gold paper and mounted the dollar in the frame, calling it the Immaculate Dollar of Arlington Heights.

But after a romantic dinner and Esther happily agreeing to be his girlfriend, things didn't go as Paul planned.

Surprisingly, when Esther unwrapped the frame with the dollar inside of it, she didn't laugh.

"She just kept staring at the dollar bill. Finally she looked up at me-but not with a smile," Paul wrote in an article for Guideposts. "She appeared shocked, confused, disturbed maybe. I couldn't tell. It definitely wasn't the reaction I was hoping for."

Esther awkwardly put her gift away and told Paul to remind her to tell him about it later. Paul let it slide.

Two years passed without any mention of the dollar bill

Things went very well for the couple. After dating for a year, Paul proposed. It wasn't until after they were married and moving apartments that Paul discovered the mysterious dollar again. He hadn't realized Esther had kept his gift.

When he asked her about what she had meant to tell him when he gave her the dollar a few years before, Esther finally told Paul a truly miraculous story.

At age 19, Esther was in an unhappy relationship. Stuck in the middle of this unhappiness, she didn't understand how people realized the moment they met their true love.

So, she decided to put her fate in God's hands

"I said a prayer that somehow, one would end up with the man I'd marry," Esther said.

When Paul showed her the dollar bill - the same day she had agreed to be his girlfriend - Esther knew they were going to get married one day.

By showing her that dollar bill, Paul became the answer to her prayer. Esther had reacted strangely, because she knew he was her soul mate, but she didn't want to freak him out by telling him the truth.

Finding the dollar bill of your marriage

One of the most powerful aspects of Esther and Paul's story is the glue the dollar bill provides in their marriage.

"Now it just sits in that very same frame up on our dresser and I look at it every day that I wake up. Sometimes I remind her that we have it when she's upset at me or angry," Paul told This American Life.

Esther also said any time she is frustrated with her husband, she thinks about the dollar bill and how her prayer brought them together.

"I do believe it's because of this dollar that I feel tied to him," Esther said. "Obviously, I love him, but I think that if it ever did cross my mind, I'd be like, but wait, this is my soul mate. I can't just walk out on him."

The Grachan's story is miraculous, but each couple can find their "dollar"- the thing that reminds them they are each other's soulmates.

Now Paul and Esther have been married for nearly 19 years. At the time Paul wrote his article, they had three children together.

"As it turns out, I'd hit the one-dollar jackpot! ... I still consider myself lucky to be married to the love of my life," Paul wrote.

In 2011, 73 percent of Americans believed soul mates exist, according to a Marist poll. But psychologists believe there is a danger in believing there is one right person for you. Instead, psychologist Shauna Springer says happy couples learn to become each other's soul mates.

Find the "dollar bill" - the thing that makes you each other's soul mates - in your relationship.